“History, family, environment and community” motivate Steve Meserve and his crew to fish for shad each year. On May 12 Steve hosted an LHS group on Lewis Island. In the iconic cabin, he reviewed Lambertville’s best-known tradition and his family’s stewardship of the shad fishery over 130 years. Afterward we watched a late-season haul.

Steve explained that the American shad is mainly an East Coast fish that winters in Florida and summers in the Bay of Fundy. When a shad matures, aged 3-5, it migrates to its natal river to spawn in fresh water. It takes 4-6 weeks for shad to swim up the Delaware and spawn near the headwaters by Hancock, NY. It does not feed as it swims upriver. Shad season starts around late March and ends around late May.

Before the colonists came to the Delaware Valley, the Lenape caught shad in nets. The Holcombe’s and other settlers in the early 1700’s caught shad; Richard Holcombe founded the shad fishery on Holcombe Island (Lewis Island’s original name) circa 1771. This was the era of “the colonial open-river fishery, when the shad provided residents of the region one of their most important food sources,” writes historian Charles Hardy III.

Bill Lewis, Steve’s great-grandfather, took over the fishery in the late 1880s. At that time, shad fishing provided good work for a season: Bill earned as much money shad fishing for two months as he did the rest of the year as a carpenter, Steve said. In 1896 more than 10,000 shad were caught at the busy fishery, which had three shifts.

The southern point of Lewis Island was paved first with stone, then concrete, to ease the haul and packing of shad, which was loaded on truck or rail. Before the paving, laying the fish on the ground got them muddy and made them less appealing to buyers.

In 1918 the Lewis family bought the island. In 1930 they built the first footbridge. Due to flooding and wear, there have been more than 70 bridges built since then, according to Steve. In 1931 the Lewis family built a golf course, complete with lights. During the 1930’s, the island hosted summer recreation programs and swimming lessons for the town.

The house was built in 1933 for seasonal dwelling. From 1948-1955 the Lewis family lived there year-round. In 2018 the house will soon host a wedding and it will again be occupied permanently. The first cabin, which houses the gear, was destroyed in a 1936 flood. Several have been built since then, increasingly raised up by design.

In 1935 the shad population declined so sharply due to industrialization and pollution that the fishery was no longer profitable. Accountants told Fred Lewis, Bill’s son, it was essentially a “hobby.” Senses of tradition and community service supported the continuation of shad fishing, as they do today. In 1943 all the commercial fisheries on the Delaware, except the Lewis Fishery, closed due to the low shad population. In 1953 and in 1956, no shad were caught at all.

These days, during shad season Steve and his crew fish at 6:00 pm on weeknights and at 10:30 am on Saturdays. They respect an old blue law that prohibits fishing after 2:00 pm on Saturday and all day Sunday–it provides a day off. Evenings tend to be more successful. Shad like to swim at shadows’ edges near the banks.

Lewis Island is home to unusual trees and flowers, Steve said. The local bald eagle likes to perch on branches and look out over the Delaware. The “secret garden” in the middle of Lewis Island was created and maintained by the late Cathy Berg, who was active in many areas of Lambertville life.

The shad population is a sign of the river’s health. Steve shares data about the fishery’s hauls with several agencies, including the NJDEP Division of Fish and Wildlife. Per Steve’s 5/12 report from our visit, “We ended up with 1 buck and 9 roe. We returned 3 and also had 3 carp [the largest fish in the photo below] and 1 quillback.”

That day the real haul for our LHS group was a richer appreciation of shad fishing on Lewis Island, a tradition that is synonymous with Lambertville. We thank Steve Meserve and his crew for their decades of dedication, custodianship, and community spirit.

Photos from our visit 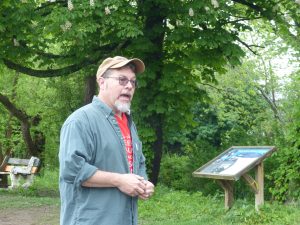 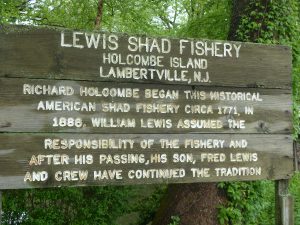 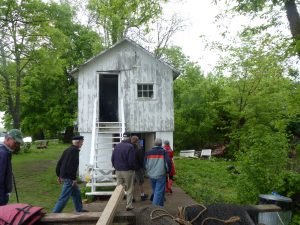 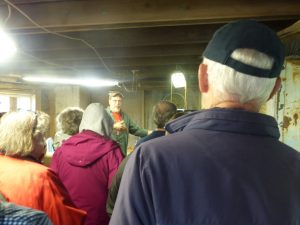 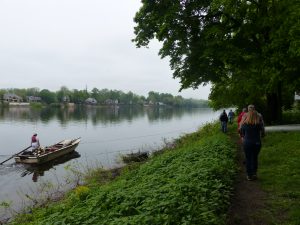 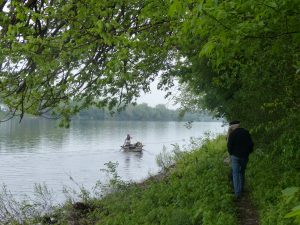 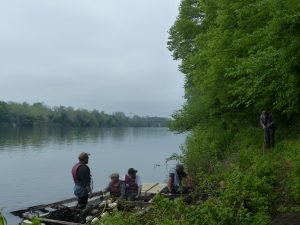 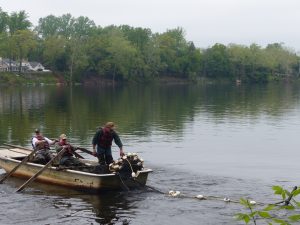 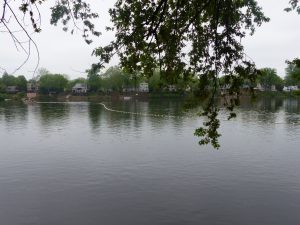 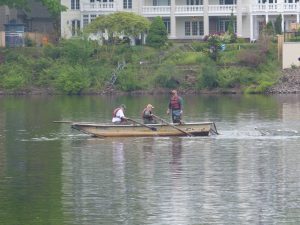 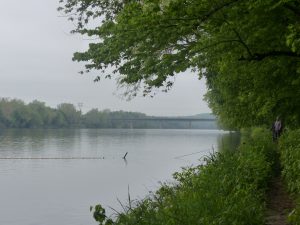 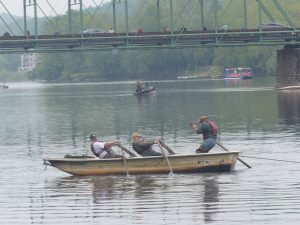 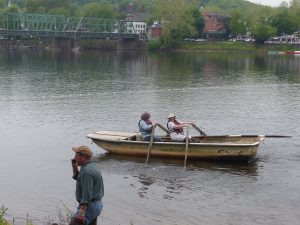 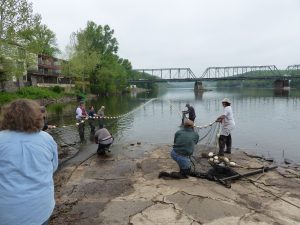 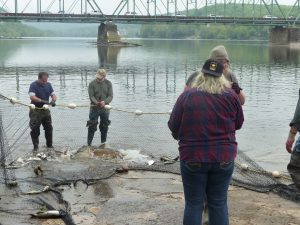 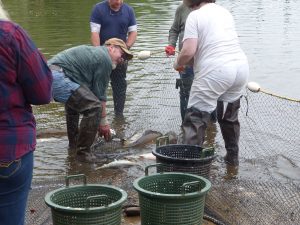 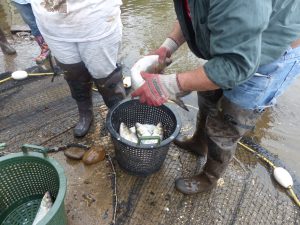